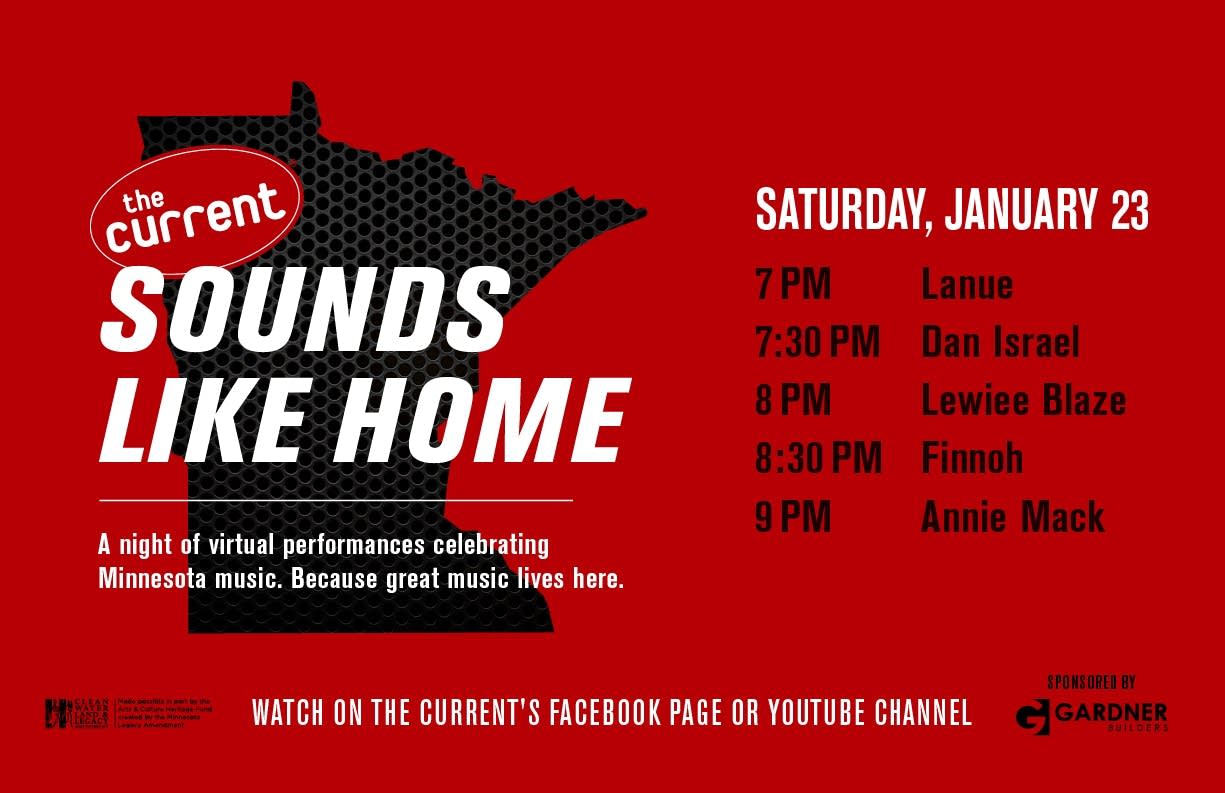 
On Saturday, Jan. 23, The Current is hosting round five of Sounds Like Home. It’s another burst of virtual performances celebrating Minnesota musicians. Join an incredible lineup of local musicians and Andrea Swensson from The Current as we meet up on the internet for a virtual festival. Great music lives here, and you can still enjoy it live on The Current’s YouTube channel or Facebook page!

LANUE: Returning to the studio several years after the release of her last full-length, 2014's Lustrous, acclaimed Duluth singer-songwriter Sarah Krueger realized that she wasn't making the next "Sarah Krueger" album: she needed a new name for the next stage in her artistic evolution. Thus was born Lanue (la-NEW), the name under which she's releasing the music she'll be sharing on Sounds Like Home. Both longtime fans and new listeners will be captivated by Lanue's multilayered soundscapes: warmly textured with acoustic and electronic elements that lap and crest like the water of Lake Superior, anchored by sharply-observed songcraft.

DAN ISRAEL: The Local Show's first ever guest and one of Minneapolis' most prolific musicians, songwriting veteran Dan Israel returns to the virtual stage with his roots-rock reflections on life. Ruminating on everything from the psychological effects of social media to the things we've put a pause on during the pandemic — Israel's music remains infectiously upbeat in a time when a little resilience and humor can buoy even the darkest days.

LEWIEE BLAZE: Lewiee Blaze is changing the narrative. The educator, activist, and rapper is always making a push for positive changes in the Twin Cities community, and does so with compassion. A song he released in the summer of 2020 asks, "Why Vote?" and Blaze spells out the urgent message that flows through all of his work: "We all have a power to impact."

FINNOH: Previously known as the Milwaukee-based hip-hop artist Ill Chill, Finnoh released his debut album under his new moniker this year from his new home of Brainerd, Minn. The change of scenery has clearly seeped into Finnoh’s work on Focus, a meditative, immersive collection of songs about soul-searching in isolation, seeking mental clarity, and pursuing freedom “in robotic times,” as he raps on “My World”: “Each day I prepare for my mission / Creating the world that I live in.”

ANNIE MACK: Annie Mack is a Minnesota blues/rock singer who tells it like it is. Like her voice, her lyrics are deep and rich. Since contributing to last year’s scathing #MeTooMpls album, she’s been wrapping up her own EP, Testify, which comes out Jan. 29.

Thank you to Gardner Builders for their support of Sounds Like Home V.

The Current encourages all music fans to support their local artists and the continued longevity of their craft. As part of this effort, The Current will be compensating artists for their performances in Sounds Like Home through the Legacy Amendment Arts and Cultural Fund.

At The Current, we are dedicated to bringing you closer to the music, artists, and other music fans. But we can’t do it without you. Please support The Current with a gift in any amount. Your contribution ensures artists and music lovers have a place to stay connected.