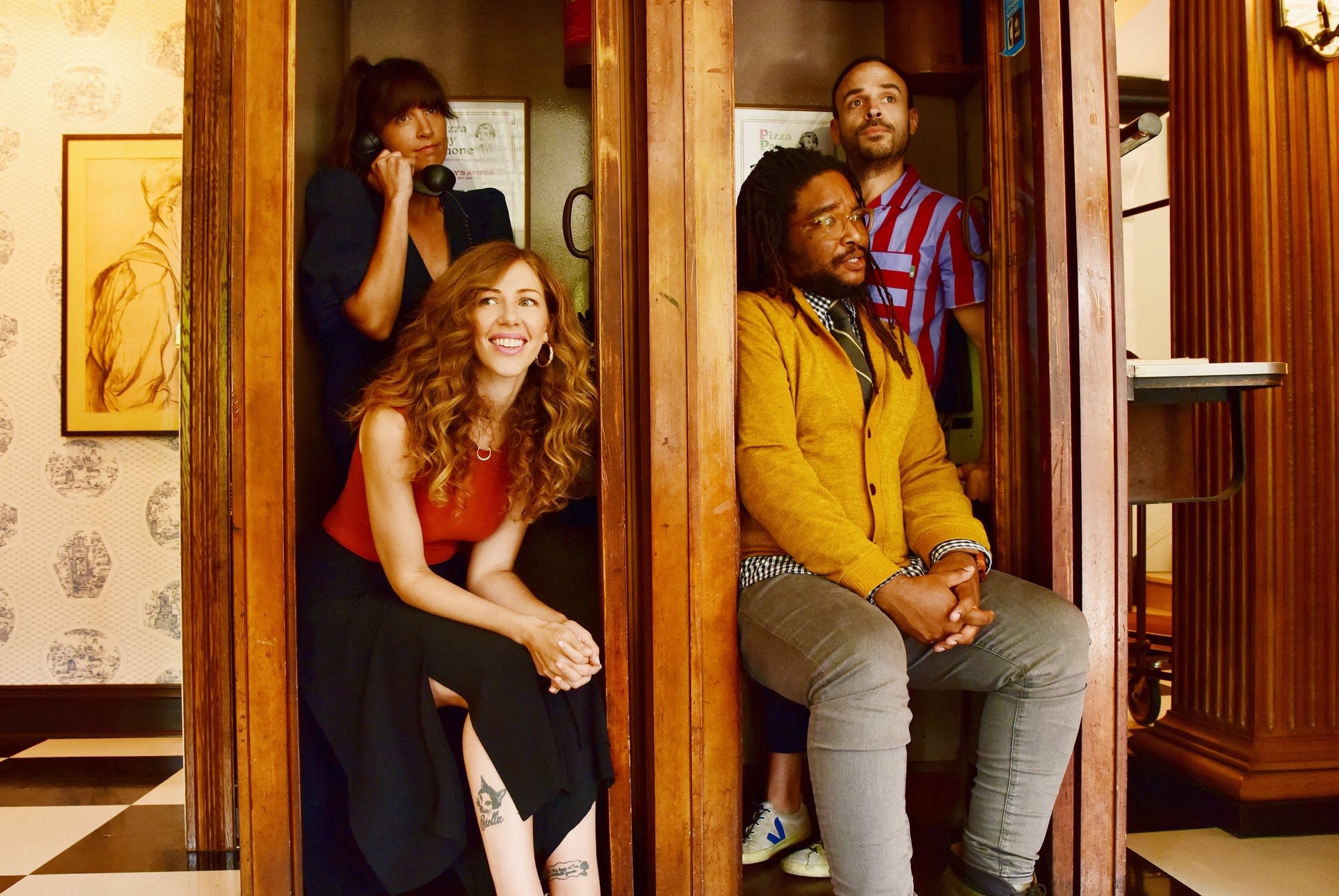 
The Current’s Music On-A-Stick returns to the Minnesota State Fair Grandstand on Saturday, August 28, 2021! Featuring Lake Street Dive along with special guests Kiss the Tiger! (Update, Aug. 23: Low Cut Connie have canceled their previously announced participation in this concert. Please see below for information about refunds.)

Lake Street Dive epitomizes democracy in action: The group, expanded into a quintet since touring keyboardist Akie Bermiss officially joined in 2017, share writing and arrangement duties. Their personalities, skills and wide-ranging taste in pop, rock, R&B and jazz have long blended together to make an impressively cohesive sound, both sophisticated and playful, combining retro influences with contemporary attitude. The band was founded in 2004 by four students at Boston’s New England Conservatory of Music: Rachel Price (vocals), Mike “McDuck” Olson (guitar, trumpet), Bridget Kearney (bass) and Mike Calabrese (drums). They have earned a devoted following thanks to social media and airplay on alternative radio. Their version of The Jackson Five’s “I Want You Back” was posted on YouTube in 2012 and has earned more than 6 million views. In 2017, their cover of A-ha’s hit “Take On Me” racked up more than 11 million views. On the band’s most recent album Obviously, the quintet fashions disarmingly cheerful arrangements guaranteed to keep the party going even as the subject matter takes a more serious turn on lead-off single "Making Do," about a younger generation facing a life of diminished expectations, and "Being a Woman," a finger-snapping, bird-flipping treatise on gender inequality.

Updated Monday, Aug. 23, 11:28 a.m. Low Cut Connie have canceled their previously announced participation in this concert. Refund information:
• Tickets purchased with a credit card through Etix can be refunded to the credit card used to purchase the tickets; request can be placed at Etix website or 800-514-3849. Etix will send an email when the refund transaction is complete.
• Buyers who purchased tickets through a third party should contact the seller to seek a refund.
For further questions regarding refunds or State Fair Grandstand tickets, contact the Minnesota State Fair Box Office by email or call 651-288-4427.

Kiss the Tiger pounced onto the Twin Cities’ music scene in late-2016 and has been making big waves ever since. Inspired by the sounds and energy of The Rolling Stones, Tom Petty and Patti Smith, Kiss the Tiger has breathed new life into 21st century rock and roll. In February of 2017, Kiss the Tiger was the runner-up in Star Tribune’s Are You Local? - Best New Band competition. Shortly after, the group recorded its EP, Elliot Park. In 2019, Kiss the Tiger released its sophomore album, Let Me Bleed. The band was recognized that year as a Picked to Click band by City Pages, an end-of-year roundup of the best local bands as voted on by their peers. The Current radio station included the music video for “Bad Boy” off of Let Me Bleed in its Best Minnesota Music Videos of 2019. Vicious Kid marks the band's third full-length release and has garnered notable attention from fans and critics alike. Kiss the Tiger's single "Hold On To Love" was featured on The Current's Chart Show and jumped from the No. 14 spot to the No. 1 spot in its second week. Star Tribune recently named Vicious Kid one of the Best Minnesota Albums of 2021 so far.