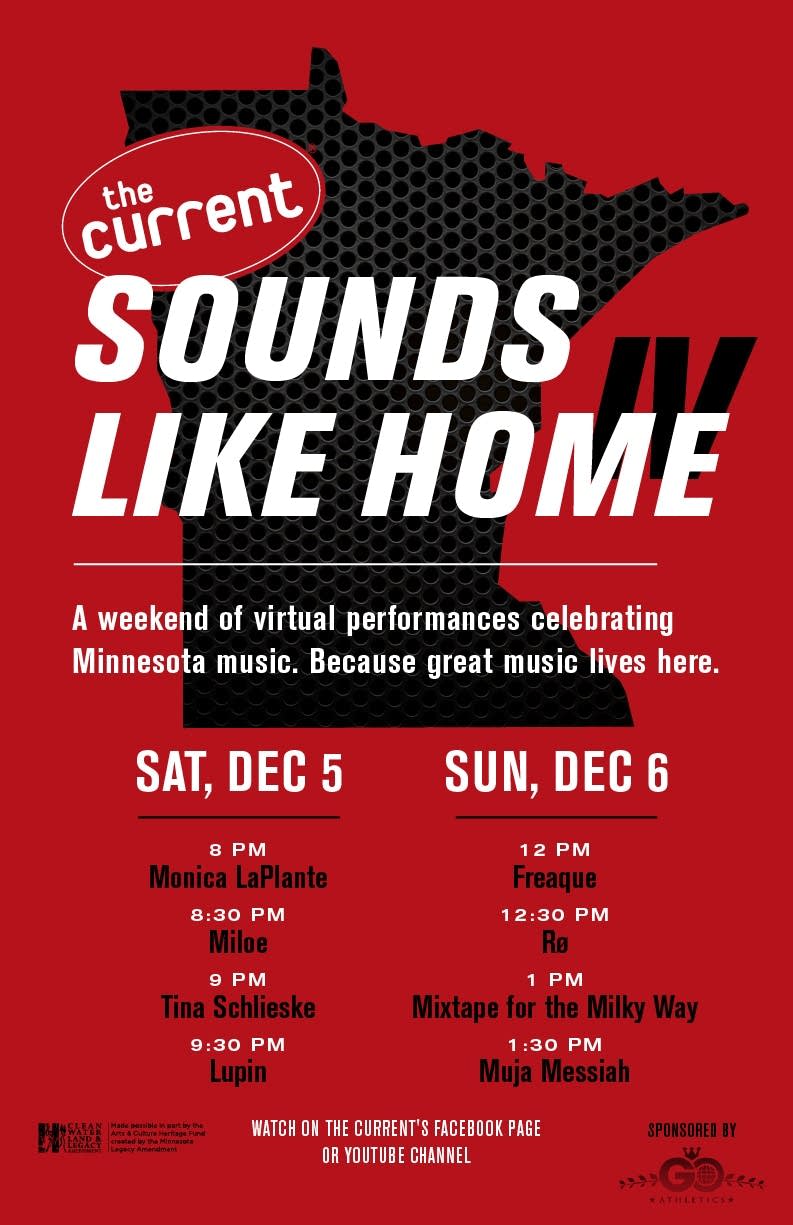 
On Saturday and Sunday, Dec. 5 and 6, The Current is hosting round four of Sounds Like Home. It’s two days of virtual performances celebrating Minnesota musicians. Join an incredible lineup of local musicians and Andrea Swensson from The Current as we meet up on the internet for a virtual festival. Great music lives here, and you can still enjoy it live on The Current’s YouTube channel or Facebook page!

FREAQUE: Freaque is the project of Gabriel Rodreick, who you may know as the vocalist of seven-piece funk band Treading North. As a solo artist, Roderick supplies eerie folk songs in the same vein as Tom Waits. He delivered Decompose, his debut EP under the Freaque moniker, in the Fall of 2019.

LUPIN: Remember Jake Luppen, frontman of Hippo Campus? This year, he went solo for the release of his self-titled debut album! Between Hippo Campus tours in 2018 and 2019, Jake gathered some friends and hit the studio. The resulting record is full of funky vibes and distorted falsetto, and it dropped in October.

MILOE: Miloe channels a summer breeze into his music so effectively that when winter hits hard, all we have to do is put on our headphones for a respite. The Congolese native moved to Minnesota at age 8, and blends elements of lo-fi bedroom pop with restrained yet bubbly production. Hear hints of Hippo Campus, a few members joined him in the studio for his latest release, "Winona."

MIXTAPE FOR THE MILKY WAY: Mixtape for the Milky Way is the new project from singer-songwriter Jeremy Messersmith. And he's not working alone! Messersmith collaborates regularly with John Mark Nelson, and plans to release a new song every week to provide atmospheric inspiration over the course of this uneasy Minnesota winter.

MUJA MESSIAH: Muja Messiah is one of the longest-running rappers in the Twin Cities, having worked with groups like Raw Villa and Villa Rosa. He's known for walking the tightrope between hardcore street anthems, humor-laced party jams, and political manifestos. In June of this year, Muja Messiah continued his flow of timely, incisive music with a solo album called Flowers Blossom On Top of Graves.

RØ: Rø is a songwriter, producer, and vocalist in Static Panic, the “disco-licious” band who’ve been starting dance parties since 2017. This year, she stepped out as a solo artist, contributing to the gorgeous #MeTooMpls compilation album as Rø, her first name.

TINA SCHLIESKE: Tina Schlieske is a true icon of Minnesota music, from her early days fronting the nationally recognized group Tina and the B-Side Movement in the '80s and '90s, to playing in the revered blues-rock band Double Trouble in the early aughts. She's gone on to launch a successful solo career, and today remains a very active member of the Twin Cities music scene — as well as a pioneering mentor to a new generation of queer artists.

Thank you to GO Athletic Apparel for its support of Sounds Like Home IV.

The Current encourages all music fans to support their local artists and the continued longevity of their craft. As part of this effort, The Current will be compensating artists for their performances in Sounds Like Home through the Legacy Amendment Arts and Cultural Fund.

At The Current, we are dedicated to bringing you closer to the music, artists, and other music fans. But we can’t do it without you. Please support The Current with a gift in any amount. Your contribution ensures artists and music lovers have a place to stay connected.